Disclaimer: Since the advent of Ventoy, this is much less useful, but a fun project nevertheless.

Ever wanted a Multiboot drive but realized turning a flash drive into one is impossible with some images(Windows in particular), and commercial solutions start at 50 EUR?

The board uses MiniHDMI. You can find Mini+MicroHDMI to HDMI connectors for under 1 EUR on Aliexpress. However video output is technically not needed, especially if you have the W version of the board.

The 5 EUR Pi Zero without Wi-Fi can also be used, but is less comfortable for my use, pushing images over the internet into it via rsync is comfy. 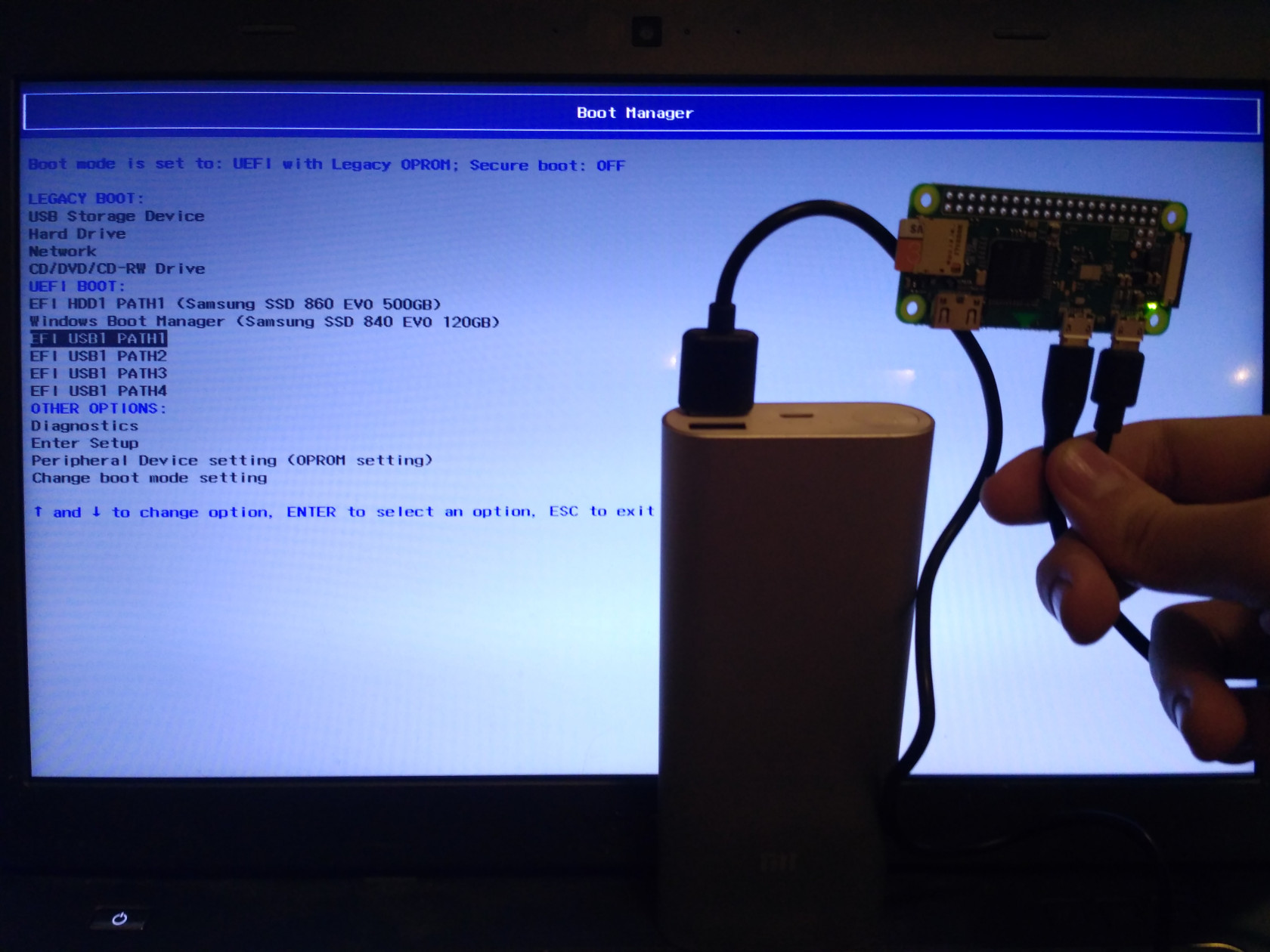 Benefits over a simple flash drive:

My OS of choice is Archlinux ARM for the board, Pi Zero is essentially Pi 1. Follow the install guide for it. Stop before step 7 if you have to W version to setup Wi-Fi first.

If you have the W version of the board, you will want to setup Wi-Fi:

Now we setup the USB Gadget which will let us use all the fun features.

Edit /boot/config.txt and add a new line to it to use the needed driver:

We're only interested in g_mass_storage for this use case. There is many more uses for this driver, check out this gist if you're interested.

If you're using the W version, install rsync, openssh, enable sshd on boot, disable password auth in sshd_config and throw your pubkey in root's authorized_key file.

W or non-W, reboot the board.

You have two ways to host your images - either via emulated mass storage or emulated USB CD-ROM.

Power the board on by connecting the PWR IN port to a power source. A power bank or another PC will do.

You will have to connect the board through the other USB port to a turned-off PC and cold boot it after you attach the image. Restarting the PC will also restart the board, see Problems in [[#Intro]].

If you want to mount another image after already mounting one, you have to remove the following first:

The following approach works for most sane bootable ISOs. Default Windows ISOs are a snowflake and need to be remastered into an image with a FAT32 partition with the files copied over. Look up loopback devices if you need Windows, or implement emulated DVD-ROM as per Problems in [[#Intro]] and use the approach below.

You can also specify up to 8 images at once, although you don't want to do this since there's no way to distinguish them in UEFI/BIOS since the module does not give the emulated devices a name.

This approach does not work with ISOs over 2.4GB, see Problems in [[#Intro]].

Tip: While this guide is for loading ISO images, you can load any image, including simple storage, or read only storage etc.

An acrylic case is some $1.7 from Aliexpress.

https://www.kernel.org/doc/Documentation/usb/mass-storage.txt <- why is the formatting broken? Same link as above

Linux-sunxi has a bit of info not present on this page, I recommend you give it a read.

Revisions
Export
Back to top